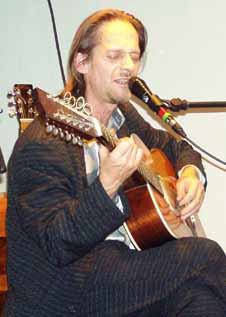 Andy is an 'old hand' singer/songwriter/guitarist in the folk world, despite his rock 'n' roll beginnings. He has performed solo and with a variety of bands over his career, including Blue Sun, Agglestone, Murphy's Lore, Black Tulip, Four Hand Reel, Tuppenny Jack, and many more. He is a skilled guitarist and sensitive accompanist for many singers. He also writes songs, many of which are based on life in his native Lincolnshire. Some of his songs are currently being arranged by other major artists with a view to them recording/playing the songs. This includes Fairport Convention and Miranda Sykes. Local folk singers have also 'adopted' his songs and you can hear them being sung at many a folk club in his current home area of Poole/Bournemouth.

Watch out for 'Tip your Hat' and 'Ship of a Thousand Farewells' and many more to come.

Video : Andy Stone singing his own song, A Ship of a Thousand Farewells

A demo CD is available on request.

back to home page